In honor of Earth Day, I’m relaunching Detoxwitch.com with a focus on detoxing the planet. I’m now focused on how ALL of my consumer choices can help improve the environment. With the mighty dollar I want to participate as a citizen rather than solely as a consumer. I’m including direct experiences with environmental products from my community, starting with a guest post from my good friend Matt Brown who recently bought a Model 3. Here’s his top five reasons to go Tesla green. 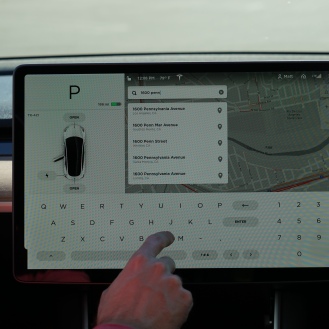 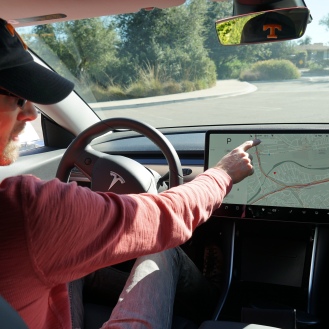 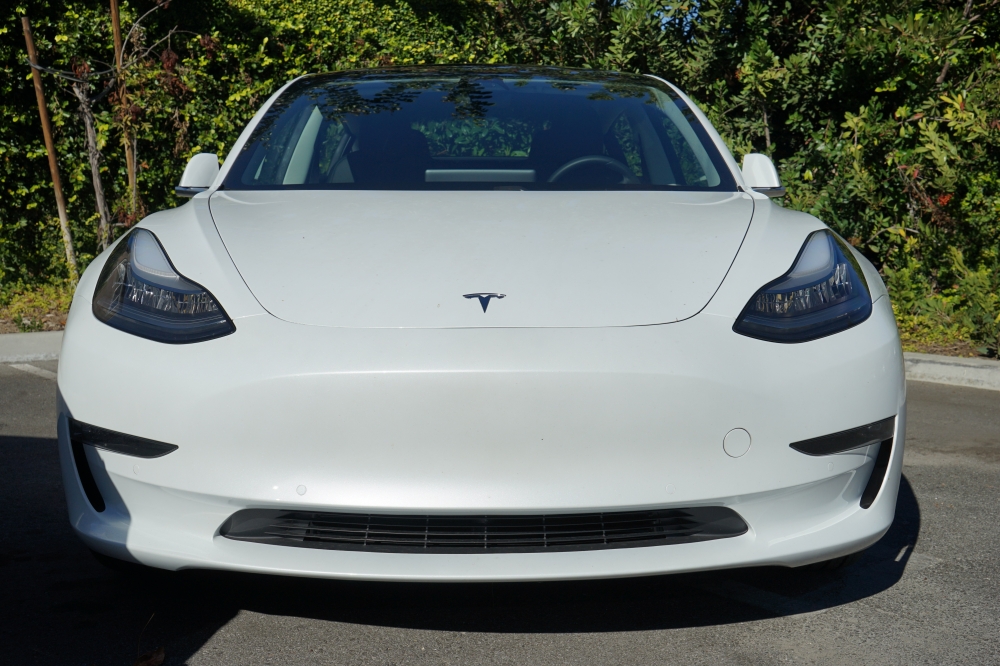 The Tesla Model 3 is absolutely the hottest car on the market right now—but you already knew that. Purchases are up an absurd 400%. “Tesla Stretch” is becoming common usage, where buyers are paying more to get into a Model 3 than the typical car purchase. The Model 3 also smashed NHTSA records to become the safest car ever tested, and it feels like it–whether Sunday cruising or Monday rat racing. But with increased insurance rates, debatable environmental impact, and a bizarre buying experience, is it worth it?

Reason 1: An iPhone on Wheels!

The 21st century vibes ripple off the Model 3, even before you step in. I unlock it with my phone simply by walking within ten feet of it. It’s ready to drive as soon as I set my foot on the brake (which admittedly took getting used to–no ON-OFF button). The Voice Activated Commands are very intuitive, and Tesla is constantly testing and updating the User Interface, even how the car physically drives. Which leads me to…

You’ve never driven a car like this. The driving dynamics are so stable thus it feels otherworldly safe. (Thanks, low heavy batteries!) Steering, acceleration, and braking can all be augmented to your particular driving style, but every mode is still cleverly balanced. Even in the “Chill” acceleration mode, I can slam the gas—oops, accelerator—and still pass traffic easily. The Comfort Steering option is tight enough for when I need to swerve away from clueless LA drivers who decide they need to be in my lane, but in general the Model 3 acts like a comfortable daily driver stuck in rush hour traffic. However, if you want to have a little fun, putting the car in Standard Acceleration, Sport Steering and Low Regenerative Braking means you can practically achieve light speed through Instant Torque. Even though I was ready for it, the first time I took it out of Chill mode, my head snapped back into the headrest.

Quick caveat, if you’re a gearhead: this feels a bit like driving an electric razor. It’s not alive like a gas engine—no rumble or shifting breaks or spurts of acceleration. The car is very sterile with little quirk.

A function of the Model 3 that gets glossed over is the Regenerative Braking feature. Like combat and kids, you don’t really get it until you’ve experienced it. Basically, lifting off the accelerator immediately starts the car braking for you, recapturing that kinetic energy back into the battery. Beyond a green way to come to a stop, this unusual sensation quickly becomes part of the way you drive the car on a fundamental level. While it seems intrusive to the uninitiated, you don’t realize how much you brake while driving, especially in traffic. Having the car immediately braking removes a physically draining motion and allows you to rely on a single pedal. You can control how much the car brakes by easing up on the accelerator, so it’s not like the car makes the decisions for you. While the amount of electricity generated isn’t going to let you skip a day of charging, the process of Regenerative Braking is the first breakthrough in the concept of driving since the Automatic Transmission. Every car should have this.

Reason 4: What You’re Really Here for…What’s With that iPad Dash?!? 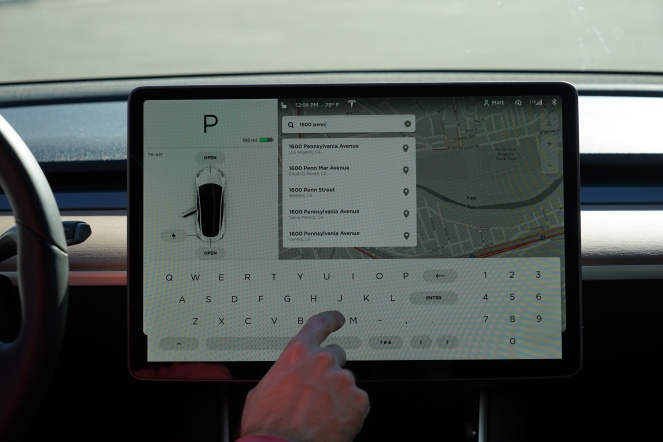 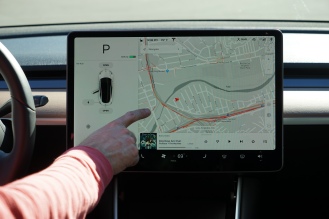 Seriously, the first thing people ask about and the most obvious WTF about the Tesla Model 3. A giant tablet in the center of the console, turned widthwise, that controls every function of the car minus Hazard Lights, Turn Signals and Door Opening. This more than the braking might cause buyers to hesitate, but you need not worry. This unique User Interface is extremely well done. Despite some minor quibbles, you soon lose the nostalgia for tactile control. The layout is intuitive, listing major car functions, in order of usage, at the bottom of screen. The bulk of the space is dominated by the Navigation Map that performs strikingly similarly to Google Maps. You can search for businesses as well as addresses and save Favorites, tweaking the Rerouting function down to how many minutes the new route will save. Voice Recognition works as easily as saying “Take Me Home” and having the traffic dynamic route pop up. It is a bit odd flicking your eyes to the console to see your dashboard, but you quickly get used to it. Just like most of the Model 3’s oddities.

This is the boring stuff for me, but I assume you’ll care. This car is very comfortable. There’s lots of cabin space and the seats are heavenly. My last car, a Focus ST, had Recaro race seats and they were the top dogs, until I sat in the Model 3’s puppies. They’re just so cushy, and still offer great support. Tesla really handles luxury well.

I got the Long Range package and the 300 mile range is very nice. My plan was to get the basic $35k model, but financially, with the $10k state and federal rebates, it made sense to get the Long Range. Although I haven’t had a charger installed in my apartment (priced between $4,500 and $6,000!!), I’ve never come close to running out of juice. Many companies offer free charging for employees and the City of LA has installed stations at which EV users receive two free hours. My only issue is these stations do not have designated parking since they’re on public streets, so you’re likely to find a dino-juice car blocking the way. I’m not proud of it, but I once totally ran the station cable over a Sentra’s hood in order to connect my car. Better watch out, Gassers, us EV folk might just stage a park-in at your local Chevron and see how you like having access to fuel blocked…

Critique Points: No Car Is Perfect…

For quibble time, let’s start with software quirks. Being this is more IOS than MPG, there’s bound to be bugs. The phone acting as key often times doesn’t unlock unless it’s in my hand. The second phone call I got turned ALL sound coming from the car, whether it was music, turn signals or navigation prompts, into a fluctuating chirp. Luckily, that was fixed with a simple restart, but you can imagine the consternation it caused after only owning the car a day. While minor or quickly resolved, this does point to what to expect from the car going forward, since this is a fundamental to how the car works. On the plus side, I don’t need oil changes!

A safety feature of the car is a Proximity Alarm that beeps, increasingly frantic, as the car approaches walls, parking blocks or other cars. While occasionally helpful, mainly when parking or traversing tight spaces, it beeps way too much and frantically to be of any help. I need it to beep when I don’t see something, but since the car cannot read my mind (yet), it just beeps at every close object, like a defensive puppy guarding its pee-designated lawn…I finally found the “Off” Setting after a month of looking.

Next kvetch, the Door Release.

Due to the window design, you have to push a small button on the door handle, in order to allow the window to roll down before opening the door. Unfortunately, there is a manual door release for when the car loses power and it is in a much more intuitive place for a door handle.

The issue is this just throws the door open, potentially damaging the window servos and not allowing it to roll down. A buddy of mine exited the passenger side this way several days in a row before I realized his mistake…but I can’t blame him. The Manual Door release is just in a more logical place.

Lastly, to get serious for a second…there’s debate as to how Earth-friendly actually EVs are. To start, it takes an enormous amount of energy to produce an EV compared with a gas-guzzler. You can actually create more CO2 emissions by plugging into those kilowatts than filling up on unleaded, if your power company is coal-powered. And sadly, lithium mining for those lithium-ion batteries has destroyed untold acreage of rain forests, cutting down on O2 producing plant life. I’m no expert, so here’s Scientific American and The Guardian with excellent features on these issues.
https://www.scientificamerican.com/article/electric-cars-are-not-necessarily-clean/

The main concern seems to be when users charge and how their electricity is generated. Obviously, if you’ve got a solar powered charger, you can’t get much greener. And with public buses switching to electric (buses uses up to 30 times the amount of gas fuel as a regular sedan) there’s a massive amount of CO2 output we’re cutting down on. As Denzel Washington says in Training Day, “Chess, not checkers.” A wide variety of issues to consider.

So, is the Tesla Model 3 worth the “Tesla Stretch”? If you want the space of a full-size sedan, the speed of an upscale BMW and the comfort of your Dad’s recliner, then yes. Yes, it is. Feel free to wait for the $35k version as the 300-mile range is nice, but unnecessary. If your budget is lacking and you still want to join the electric slide, then Chevy makes a wonderful Bolt and a BMW i3 is a surprisingly cheap used option. But if you want something unique, even among electric cars, the Tesla Model 3 is a definite yes.

Matt Brown is an editor and writer in Los Angeles originally from Knoxville, TN. His credits include Guys Grocery Games, Farmer Wants a Wife, and the Real Housewives of Orange County. You’ll find him scaling the walls of Los Feliz with the latest parkour moves he’s perfecting or or trying out new recipes with his lovely girlfriend, Carly.

a budding poet, ardent writer, and a voracious reader

A little BIT OF THE EVERY DAY............A good writer is basically a story teller, not a scholar or a redeemer of mankind. - Isaac Bashevis Singer

A 60-something guy trying to figure out the world, and his place in it.

When a woman tells the truth she is creating the possibility for more truth around her. Adrienne Rich

Being a Brit living in Switzerland,

Doing the best I can with what I have